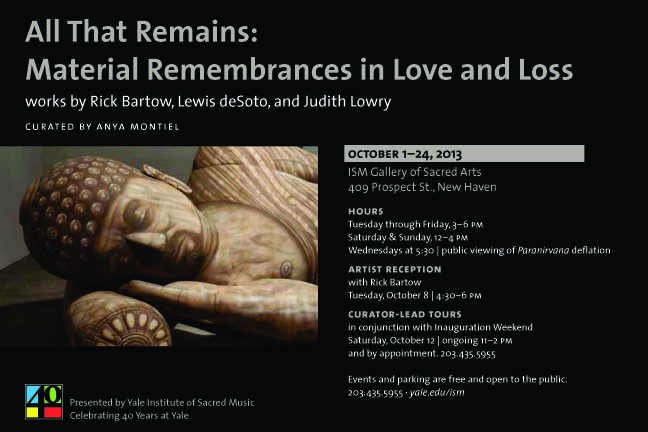 In May 2016, fellow PhD candidate, Sequoia Miller, and I proposed an installation of Rick Bartow works on paper from the Yale University Art Gallery permanent collection. The works had never been on view in the gallery before and would coincide with the major retrospective, Rick Bartow: Things You Know but Cannot Explain, touring American museums in the West through 2019. The gallery also launched a Native American Art Initiative, which raises awareness of the role of indigenous North American artists with works in the collection.

The curators approved the installation of five Bartow works in the gallery for an opening date of June 10, 2016. Sequoia and I wrote the gallery card text and assisted with their placement. Additionally, I gave a gallery talk about Bartow’s career and the specific artworks.

The gallery has a total of seven works on paper by Bartow (Mad River Band Wiyot, 1946-2016) dating from the 1980s, the early years of his professional career and exhibit themes that would continue to engage him. His work often blends human and animal bodies in what appear to be states of transformation, as are seen in the drawings at Yale. Bartow, who passed away on April 2, became a widely celebrated American artist who worked prolifically in a wide range of media including oil pastel, acrylic, and wood.

These works came into the gallery’s collection in 2009 as part of a major gift from Richard Brown Baker, a prodigious collector and Yale alumnus with an eye for emerging artists.

In 2013 I proposed and curated the show, All That Remains: Material Remembrances in Love and Loss, at Yale’s Institute of Sacred Music.

The show brought together three artists (Rick Bartow, Lewis deSoto, and Judith Lowry) who have expressed reactions to the loss of loved ones through art. For these artists, the process and actualization of art-making renders the evanescent body eternal, memorializing the otherwise apparently absent one(s). Here material acts of artistic production have created remembrance and rebirth in times of mourning. These artists present work in varied media—an inflatable, plasticized Buddha; large-scale portrait paintings; and pastel drawings on paper—to respond to the immediacy of death and the pain of loss and to assert connection in the face of mortality.